Takeaways from The 2021 Women's Leadership Forum

END_OF_DOCUMENT_TOKEN_TO_BE_REPLACED 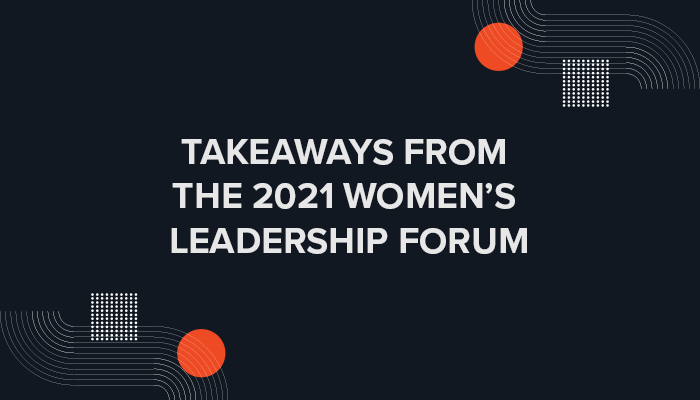 Takeaways from The 2021 Women's Leadership Forum

AMP Attends the Ad Club Women’s Leadership Forum     On the eve of AMP’s quarterly mental health office closure, a group of AMP’s female associates virtually gathered to attend The Women’s Leadership Forum (2021) hosted by the Ad Club. The tagline of this year’s event, Nevertheless, She Persisted, was a foreshadowing of the primary theme throughout each session: persistence. By extension, this stands out as a reflection of an AMP core value: growth.    Fighting Invisibility     Gender and ethnicity also served as contextual backdrops for the stories told within each session. Award-winning author Gish Jen discussed her experience of becoming a novelist as an Asian American woman and the outside responses this frequently evoked. Being questioned as to why she wasn’t writing stories set in China was a common occurrence for Jen, and she explained that experiences like these often leave Asian Americans feeling invisible. However, instead of playing the role of a “professional victim”, as Jen puts it, she chose to stand her ground. Her decided response was: “Do Asians write about these topics? They do now.”    Making Intentional Choices    This notion of choice recurred throughout several sessions, with speakers explaining that having intentional responses to negative situations has profoundly shaped their journeys. Former NWHL Player & Pro Scout Blake Bolden owns that her successes have always come from the choices that she’s made. Growing up as a Black female, she had to rely largely on herself to make these choices as the sport lacked other Black females whom she could look up to. Now, Bolden is able to be that role model for other young women. “When you decide to wake up an choose to be better every single day, you’re not just making in an impact on yourself, but you could also be making an impact on someone else,” she noted while retelling the story of meeting a young Black girl who’d been inspired by Holden to play hockey. It was then that Holden realized she wasn’t just playing for herself, she was also playing for the people that she inspires. “You always have an option to choose,” she says.    Being Kind To Yourself    That said, getting better every day doesn’t mean working around-the-clock and ignoring burnout. To visual artist Nancy Floyd, giving herself permission to reflect and reset has allowed her to rediscover her passion for artistic endeavors that she’s become disinterred in. “Take baby steps,” she advises. “You don’t want to work out? Drive to the gym, and if you still don’t want to work out, drive home.” While she certainly isn’t a procrastinator, self-forgiveness and kind inner talk live at the center of Floyd’s creative process.    Staying The Course    During another session led by Wendy Ong, U.S. President of TaP Music & TaP records, listeners learned about her unconventional journey from a small apartment in Singapore to leading record labels and discovering top talent in the U.S. After moving to the U.S. with her then-husband, Ong did everything she could to land a job in the music industry, including blindly knocking on doors at record companies in NYC. After finally breaking into the scene, Ong experienced several years of success before a particularly disheartening experience at a label that left her wanting to quit the industry and return to Singapore. With the encouragement of her parents, she decided to keep marching towards her dreams. Now, as the President of a major U.S. record label, paving the way for other young women in the industry has become one of her primary passions. Noting that she wouldn’t want others to face the same struggles, she goes out of her way to “dust off the path for others so they can start their journey a little easier”.    Becoming Unstoppable  Each of these women come from vastly different backgrounds. Unwaveringly though, throughout their stories we are met first with persistence and then with growth. We quickly learn that when determination is combined with intentional choices, self-forgiveness and the understanding that actions can lead to positive change for not just the person taking action but others who look up to them as well, we become unstoppable.