END_OF_DOCUMENT_TOKEN_TO_BE_REPLACED

What Do Capricorns Hate? The Burning (with hatred) Questions We Google About the Twelve Signs of the Zodiac

For Valentines Day 2021 we decided to explore the top "hate" queries associated with every astrological sign according to their Google search volume. Since we're SEOs and not astrologers, in addition to our search intelligence insights we'll also include the top image associated with every query. Also make sure to check out our companion piece to this article, The Most Loved Zodiac Sign, Search Listening, and Why I’m Glad I’m not a Gemini, for more Zodiac search volume fun!

What Do Capricorns Hate

"What do Capricorns hate" was tied with "Scorpio hates" for the position of most searched “sign” + “hate” query. According to the highest ranking image for this query, Capricorns dislike it when negative and critical people are discouraging and disparaging to others. They understandably dislike self-important people along with moochers, liars, flakes, and gossips. Capricorns can easily tell the difference between clever and obnoxious behavior and dislike the latter. 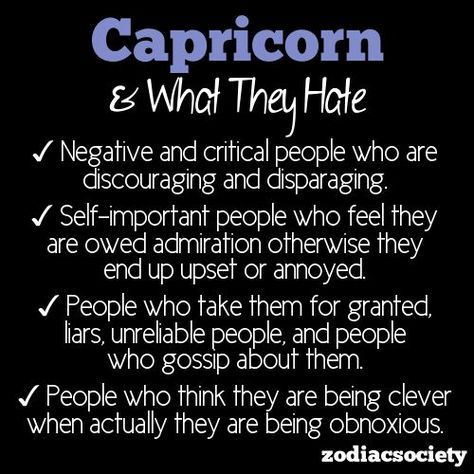 There were eight instances where Google showed search volume for a sign plus the word “hates”. We thought it would be interesting to share the most common “hates” queries by MSV along with some other bonus insights.

Self sufficient Scorpios hate relying on others, not being in control and being left unaware. They despise disloyalty, dishonesty, and greed. They aren't fond of the dispassionate and people who can't take a joke, but also don't you dare tell a Scorpio to "get over it". Scorpios don't like emotionally closed off behavior and having to explain or justify their own emotions. You can be assured that if you've just met a Scorpio, their guarded nature means they probably don't trust you yet. If you are an unmotivated freeloading failure, don't expect any sympathy from a Scorpio. 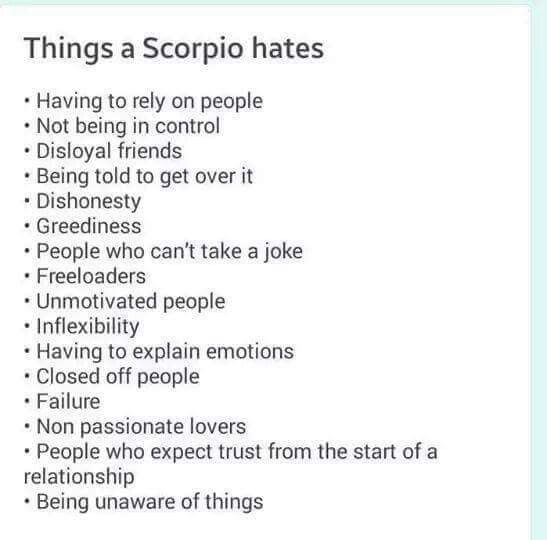 Keep your hands to yourself around a Virgo! They don't love touchy people who fiddle with objects around them. Virgos also don’t care for incompetent, careless, and stupid people. Boasting and whining around a Virgo is not a key to their heart. If you have a stubborn personality you might have a hard time getting along with a Virgo. 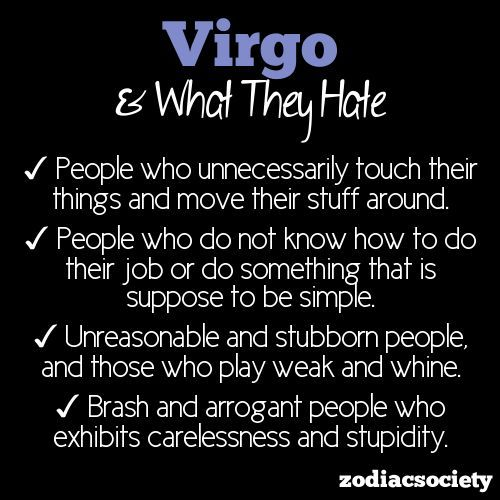 If you would describe yourself as a nitpicker then there is a good chance a Taurus will perceive you as pestering. Hypocritical behavior and flip flopping is especially annoying to a Taurus who values sticking to your guns. Loud and impatient behavior is a sure way to get under a Taurus's skin. 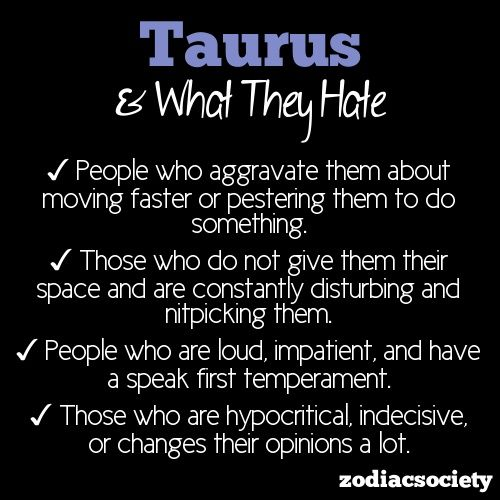 Nothing irks a Sagittarius more than assuming they are lying to you. Like Scorpio, Sag hates it when people can't take a joke. They are disinclined towards unenthusiastic people and cynical people. They don't want anyone trying to control them and hate it when folks don't play fair. Being a sore loser and not accepting when you are wrong is a sure way to get a Sagittarius on your bad side. 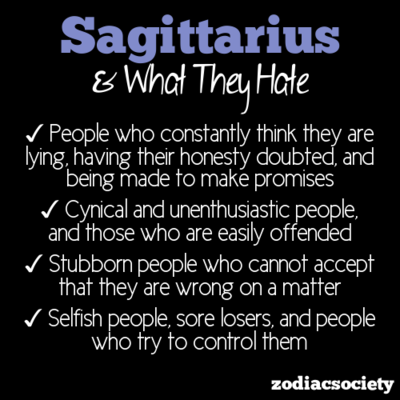 Selfish, inconsiderate, and unfair behavior is extremely annoying to a Libra. Don't plan on rushing them into making a decision and always offer to return a favor you owe them. If you take advantage of a Libra's friendly nature they might not forgive you and they revile it when you bring chaos and uncertainty to their life. 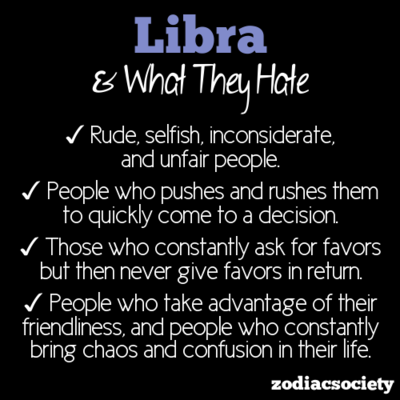 Sluggish time-wasting behavior is bothersome to Aries. Don't get in the way of a motivated Aries and don't be indirect with them either. You won't succeed in tempering their relentless optimism with cautiousness or pessimism but you'll bug them if you try. 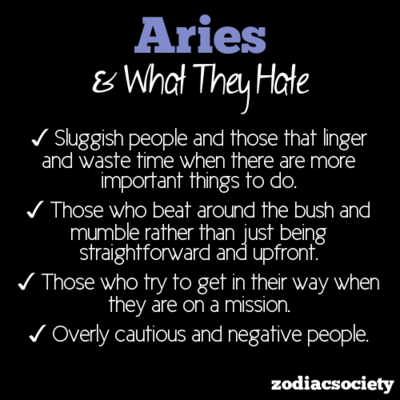 Like we said, Capricorns hate dream-crushers and the overly negative. They also reserve extra dislike for fake people and obnoxious people.

Nothing turns off an Aquarius more than pushy, showy, or overbearing behavior. Give an Aquarius plenty of space and always demonstrate open mindedness when you're around them. An Aquarius considers themselves a dedicated friend so it can be extra hurtful to them if you question their friendship and authenticity. 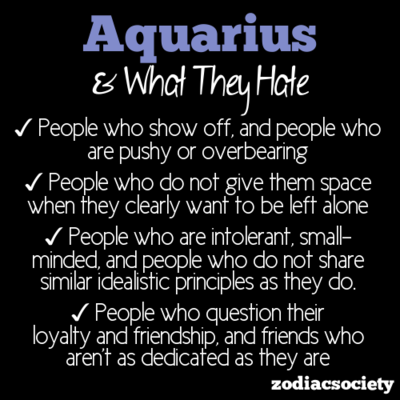 "Why do people hate Capricorns" gets 110 searches a month, it's safe to say lots of other signs find this sign ornery. "Virgo man hates being ignored" also gets 110 searches a month so don't do that if you're trying to win one over. "I hate Virgo men" was the top "I hate" query with 90 searches a month. Tied for second place for this undistinguished prize with an MSV of 50 is Taurus women, Libra men, Tauruses in general, and "being a Pisces", which hits us right in the feels. The Bronze medal for "I hate" is a tie at 40 MSV between "Aries men" and "Pisces" in general.

If you loved this article check out our companion piece, The Most Loved Zodiac Sign, Search Listening, and Why I’m Glad I’m not a Gemini.

Welcome to the AMPlifier – a spotlight on the latest and greatest industry updates. Whether you want to learn more about this week’s marketing trends, the newest updates to your favorite social media platforms, or simply what meme is currently taking the internet by storm, then read on. You never know what you might learn. TWITTER RE-LAUNCHES TEST OF WARNINGS ON POTENTIALLY HARMFUL TWEET REPLIES Twitter is now re-launching the alerts, with a new format, and further explanation as to why each reply has been flagged. Read more CLUBHOUSE FACES NEW SECURITY QUESTIONS AFTER SIGNIFICANT DATA BREACH The latest comes as a result of hackers gaining access to Clubhouse audio, and re-recording that data into third-party streams. Read more 15 TIKTOK TIPS TO MAXIMIZE YOUR BRANDED CONTENT EFFORTS This overview of tips from the team at Socialtyze covers everything from choosing topics to user demographics to hashtags on the platform. Read more That’s a wrap on this week’s feed. Stay tuned to see what happens next.

AMP Agency took home 4 awards last night at the 60th annual Hatch awards that celebrates creative excellence in New England. AMP won bronze awards for the below work: “Eastern Bank’s Color & Capital for Good closing Boston’s wealth Gap” Work for Good Category “Facebook’s Gaming Just Like Us” Film Category “Stop & Shop’s On Your Terms”Design Category AMP also won a Merit award for work done with RXBAR.  Be sure to check out AMP’s article featured in the Boston Globe that looks at the virtual realities of advertising and how flexibility led to a creative growth spurt in marketing in 2020.