END_OF_DOCUMENT_TOKEN_TO_BE_REPLACED

For the second assignment at  AMP Agency's Insights Lab Incubator, we asked the students to create a consumer persona for an assigned demographic.

Check out the students' consumer personas. 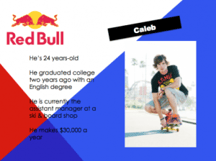 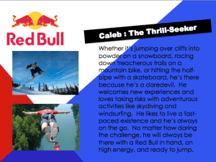 He graduated college two years ago with an English degree

He is currently the assistant manager at a ski & board shop

Whether it's jumping over cliffs into powder on a snowboard, racing down treacherous trails on a mountain bike, or hitting the half-pipe skateboard, he's there because he's a daredevil. He welcomes new experiences and loves taking risks with adventurous activities like skydiving and windsurfing. He likes to live a fast-paced existence and he's always on the go. No matter how daring the challenge, he will always be there with a Red Bull in hand, on high energy, and ready to jump. 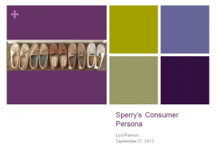 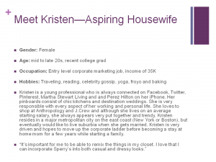 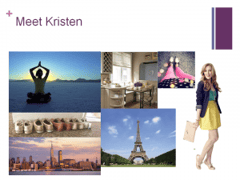 Her pin boards consist of chic kitchens and destination weddings. She is very responsible with every aspect of her working and personal life. She loves to shop at Anthropology and J.Crew and although she lives on an average starting salary, she always appears very put together and trendy. Kristen resides in a major metropolitan city on the east coast (New York or Boston), but eventually would like to live in suburbia when she gets married. Kristen is very driven and hopes to move up the corporate ladder before becoming a stay at home mom for a few years while starting a family.

'It's important for me to be able to remix the things in my closet. I love that I can incorporate Sperry's into both casual and dressy looks.'?

Andrew is a really social, 'live-for-the-moment'? type of guy.  Him and his friends are always up to something exciting & he loves every second of it.

'Nothing beats hanging out with friends.'?

He's got a huge appetite, and a major sweet tooth, just like his pals.  They always share snacks.

'Skittles have a rush of flavor.'?

He's a down-to-earth guy at the end of the day, and he wants to enjoy being young while he still can.  He's all about making awesome memories and taking pictures of all the crazy, fun times that he has with his friends.

Mark is a 21 year old undergraduate at Harvard University. An on campus innovator, he spends a lot of time wired in programming his site The Facebook. When he's not drowning in CS problem sets he's trying, desperately, to win his BU girlfriend back.

Mark has a full plate. He doesn't have time to shop around for best prices and products. As a college student on a budget it's hard for him to keep up with Boston's city prices so he's always on the look out for a steal. He's loyal to brands he knows work - but style isn't his number one priority.

Mark is a busy college student but he's up to date on digital trends. He enjoys blogging, streaming Jay-Z on Pandora and keeping up with House of Cards. He's also a voracious reader and is constantly looking for new ways to read on the go. 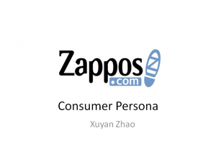 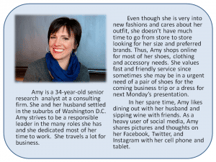 Amy is a 34-year-old senior research  analyst at a consulting firm. She and her husband settled in the suburbs of Washington D.C. Amy strives to be a responsible leader in the many roles she has and she dedicates most of her time to work.  She travels a lot for business.

Even though she is very into new fashions and cares about her outfit, she doesn't have much time to go from store to store looking for her size and preferred brands. Thus, Amy shops online for most of her shoes, clothing and accessory needs. She values fast and friendly service since sometimes she may be in a urgent need for a pair of shoes for the coming business trip or a dress for next Monday's presentation.

In her spare time, Amy likes dining out with her husband and sipping wine with friends. As a heavy user of social media, Amy shares pictures and thoughts on her Facebook, Twitter, and Instagram with her cell phone and tablet. 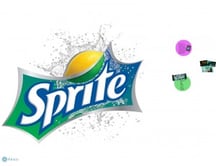 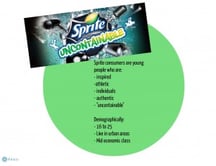 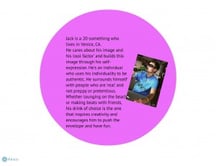 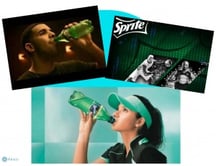 Sprite consumers are young people who are:

Jack is a 20-something who lives in Venice, CA. He cares about his image and his 'cool factor' and builds this image through his self-expression. He's an individual who uses his individuality to be authentic. He surrounds himself with people who are 'real' and not preppy or pretentious. Whether lounging on the beach or making beats with friends, his drink of choice is the one that inspires his creativity and encourages him to push the envelope and have fun. 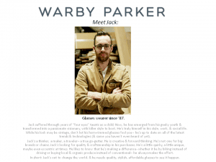 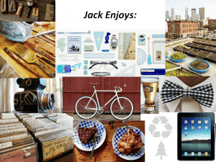 Jack suffered through years of 'four eyes'? taunts as a child; now, he has emerged from his geeky youth & transformed into a passionate visionary, with killer style to boot. He's truly himself in his style, work, & social life. While his look may be vintage, don't let his horn-rimmed glasses fool you-- he's up to date on all of the latest trends & technologies (& some you haven't even heard of yet).

Jack's a thinker, a maker, a traveler' a true go-getter. He is creative & forward thinking. He's not one for big brands or chains. Jack's looking for quality & craftsmanship in his purchases. He's a little quirky, a little unique, maybe even eccentric at times. He likes to know that he's making a difference- whether it be by biking instead of driving or buying local & organic produce instead of conventional' he always makes the effort.

In short; Jack's out to change the world & he needs quality, stylish, affordable glasses to see it happen. 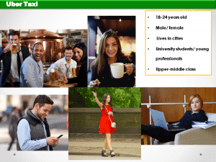 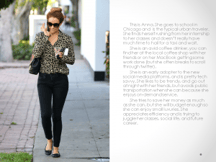 This is Anna. She goes to school in Chicago and is the typical urban traveler.

She finds herself rushing from her internship to her classes and doesn't really have much time to hail for a taxi and wait.

She is an avid coffee drinker, you can find her at the local coffee shop with her friends or on her MacBook getting some work done (but she often breaks to scroll through twitter).

She is an early adopter to the new social media platforms, and is pretty tech savvy. She likes to be trendy, and go out at night with her friends, but avoids public transportation when she can because she enjoys on-demand service.
She tries to save her money as much as she can, but she will budget enough so she can enjoy small luxuries. She appreciates efficiency and is trying to juggle her classes, social life, and future career. 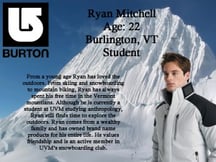 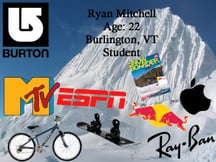 From a young age Ryan has loved the outdoors. From skiing and snowboarding to mountain biking, Ryan has always spent his free time in the Vermont mountains. Although he is currently a student at UVM studying anthropology, Ryan still finds time to explore the outdoors. Ryan comes from a wealthy family and has owned brand name products for his entire life. He values friendship and is an active member in UVM's snowboarding club.

What do you think of these consumer personas? Spot on? Share with us in the comments box.

How Brands Can Reach The Hispanic Audience