END_OF_DOCUMENT_TOKEN_TO_BE_REPLACED

In our continuing series of examining Google Search Trends to gain insights into the top keywords queried in the USA, we present our findings for February 2020.

Every day, we capture the top three keyword phrases in terms of search volume as reported by Google Trends (US Only). Each term has an estimated query volume attached to it, which we also record. The number scale tops out at 10,000,000+ with a lower limit of 200,000+. After the conclusion of the month, we look at the phrases we collected along with their volumes to get an understanding of what drove queries for the month.

The Super Bowl and The Oscars

Clearly, people need to know when the Super Bowl is going to start so that they can get their chili cooked in time for kickoff. The winning quarterback also seems to win in the search game (sorry, Jimmy G). As for the halftime show? Well, no matter what anyone’s opinion was about it this year, the data proves that it captivated people enough to search for both of the headlining performers. It’s quite the change in pace from last year when the headlining band did not make the top 3 queries of the day (sorry, Maroon 5).

The Academy Awards - known by their more commonly searched name, The Oscars - also generated large search volumes around its date:

It’s interesting to see what topics other than the name of the event itself drove people to search.  This year, it was the name of the Best Picture, Best Actor, and Best Supporting Actress.

As for the name of the event itself, we noticed that when compared to last year, the query volume for the 2019 Oscars was higher.

Comparing these two numbers, we wanted to see the data presented via Google Trends’s chart.  By using the search term, “the oscars”, we queried Google Trends to see the popularity of the term in the USA over the past 5 years: 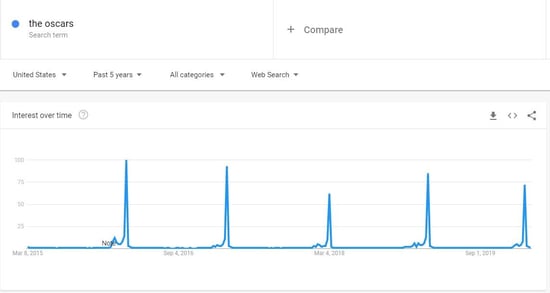 This chart further indicates that the Oscars drove less searches this year than most years prior. We wonder if the earlier date of this event (the awards ceremony typically occurs near the end of the month) or a less interesting year in film is the reason for less interest this time around.

When it comes to comparing the Super Bowl to the Oscars, there isn’t much of a comparison between search volumes:

Other Sports in February

Besides the Super Bowl, here are the other sports related queries:

NASCAR had a few queries make our list this month. The top queried phrase was related to Ryan Newman’s crash at the Daytona 500. Boxing had another top phrase with people looking for more information about the fighter Tyson Fury. Meanwhile, the NBA All-Star game and the new American football league, the XFL, drove people to search for scores and stats..

In January, we saw the first spike of search interest about the disease occur on the 21st. Even though the subject has been in the news since that day, the topic didn’t make our top queries until late in February:

The news about this virus has been ongoing since January, but in February, the number of search queries behind specific phrases was on the lower side. Typically, top phrases are over 10 million queries, while “Coronavirus symptoms” only reached just over 1 million. Even though the topic seems to be searched for with different queries, the volume appears to indicate that last month in February, people weren’t seeking information about it as often as other topics.

With the Impeachment trial wrapping up and the presidential election primaries heating up, queries related to politics were plentiful in the month of February. Here are the top queried phrases of the month :

Interesting to note: the keyword “New Hampshire Primary” only drove 500,000+ queries. We theorized that its outcome was less in question than the other primaries.

Lastly, there were fun queries that were driven by social media mentions and activities:

The broom standing up query was based on the hoax that there was a special gravitational pull that occurs only on February 10th. NASA explained that standing a broom on its own can happen on any day because of basic physics.

The day before Valentine’s Day has become an unofficial holiday and its search query popularity really popped this year: 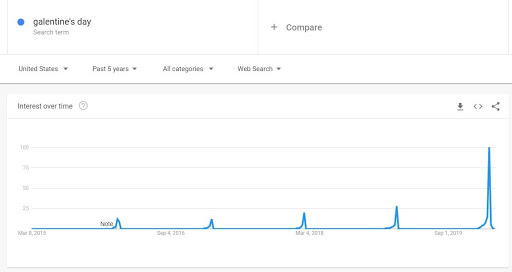 Are there marketing opportunities for Galentine’s Day next year? With a search trend like the one above, we’d say it’s likely.

See you next month!

AMP Agency, a full-service digital marketing agency, has acquired Genome, an award-winning digital innovation, transformation and product development company. The addition of Genome will further AMP’s strategy to advance technology-enabled innovation and grow internationally. “Our technology practice has become a valuable resource for clients. It was clear from the start that Genome would bring necessary skill sets, so the acquisition felt natural. The addition of the Genome team’s expertise and its capabilities take our offerings to a new level.” said Michael Mish, President of AMP Agency Genome CEO Matt Fitz-Henry will serve as senior vice president of technology for AMP Agency, with the primary objective of building innovative technical solutions for clients. Genome’s Executive Vice President and General Manager Nate Herr will serve as senior vice president, technology services.   Read the full press release here.

How Brands Can Use Social Components In Products